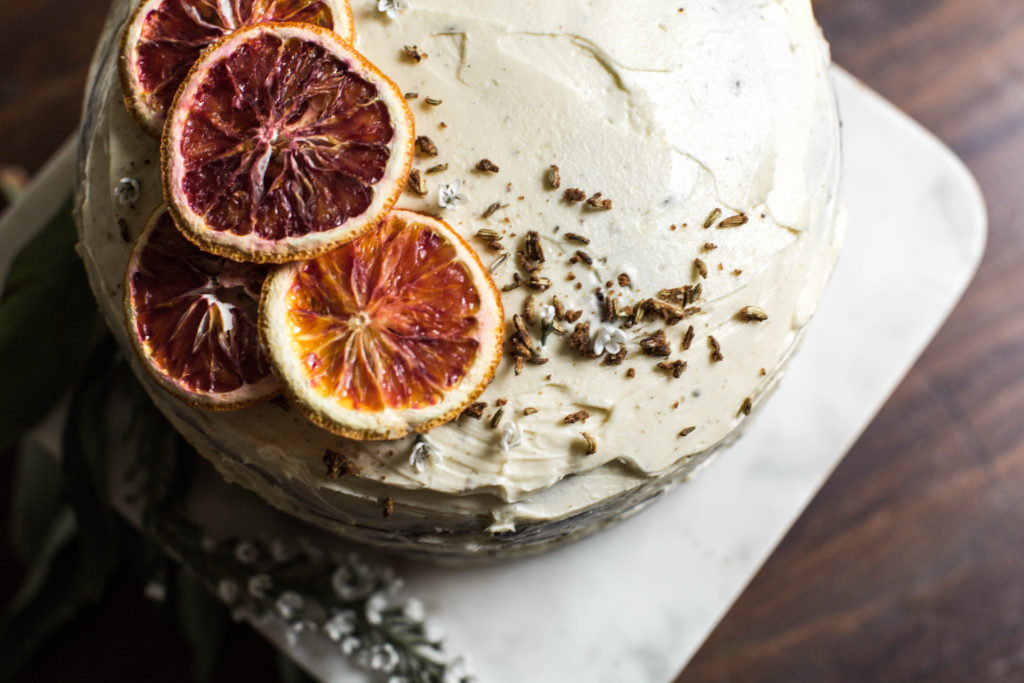 I turn 30 today – on the new moon of December 7th. The same new moon I was born on. Call it auspicious or significant, whatever planetary alignment it is, it’s brought a tangible feeling of freshness and excitement into greeting this new decade ahead of me.

I’d be lying if I said this transition was welcomed with ease. In fact, I spent much of 29 fretting about turning 30. I know, it’s ridiculous. I always laughed at friends who stressed about age, and swore I would absolutely never be that person who made a simple number into a big deal. But damn, I was that person this year.

I spent the year brushing up against the discomfort of my own self-instilled markers of where I thought I should be in business and in relationships by 30. Then I got to feel those layers of less spoken about cultural norms for women, the ones that have faded from everyday dialogue in the modern age but still are deeply embedded in our collective consciousness about babies, money, aging, desirability and self-worth. Ooof. Those ones were fun.

For me, the beauty of turning 30 is that the eyes that now gaze back at me in the mirror are ones that have lived to see some life now. They’ve seen incredible sunsets and views from mountain top hikes and climbs that can never be forgotten, moments so vibrant they burn into your memory. They’ve seen laughter and beautiful meals around the table, good art and dance, temples and rituals around the world. They’ve witnessed loss, deep heartache and grief, tragedy that feels unfair and cruel in the world. They’ve seen cycles of ups and downs, peaks and lows, celebration and loss. And they’ve seen enough now to know that this range of the human experience is exactly what it means to be so brilliantly alive. That with the waxing, there is also the waning, and that’s what makes life whole, complete.

“I am discovering and becoming the woman that I want to be everyday, a little at a time. My idea of that woman shifts with me organically as I find myself and grow, and as I learn to accept and embrace who I am.

So 30 has brought integration into my life and the deeper embodied awareness that no matter what life brings to you in its many forms, you’ll make it through. And with that, I suppose, comes more confidence in who you are, where you’re heading and the kind of people you want to surround yourself with to share the ride. I don’t know if I necessarily have anything really figured out (the more you learn the less you know right?), but as I get to look back at where my decisions led me, I’m learning to trust the mystery of life and those deeper movements that pull you in a direction that sometimes make no sense but lead to the most incredible places. I’m excited to welcome in a new decade of exploration of self and my work in the world. And with that, more dance, more music, more play, more laughter, more adventures, relationships and all the juicy experiences that life has to offer. I’m here, ready to drink it all in. 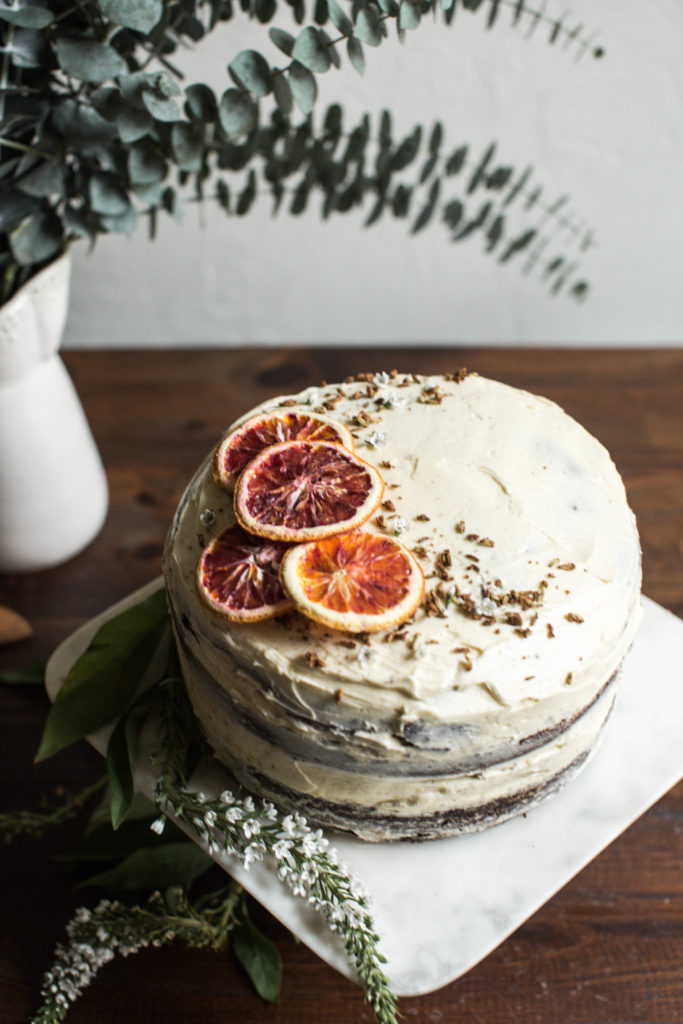 In preparation for this decade celebration and to keep with the birthday cake tradition (see the cakes archives here), I started recipe testing cakes weeks ago when I was back in my Oklahoma kitchen and cozied into the colder autumn weather. I had just driven through Taos and made a stop at on my favorite spots, Wild Leaven Bakery. They have an incredible molasses fennel sourdough bread I brought home with me. I spread ghee and sprinkled sea salt on it and dipped in into this soup for a few meals. It was divine. And the flavor combination got me thinking, what would molasses and fennel taste like in a cake? 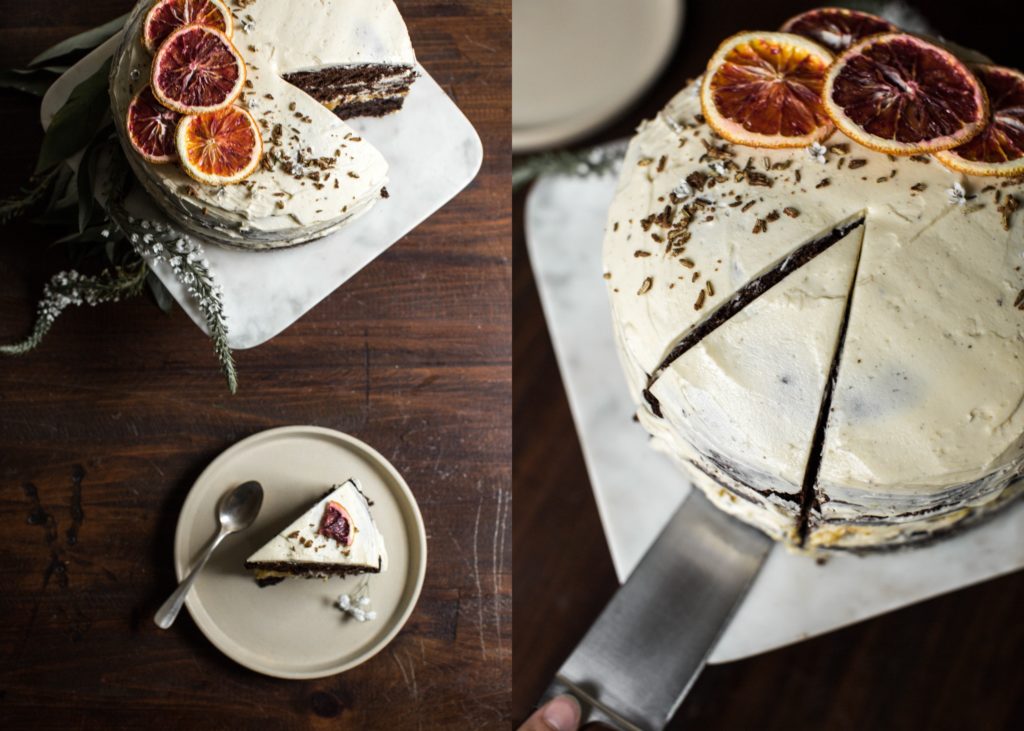 I started drafting an idea for a fennel molasses cake. The first round was great in texture, but I used waaaay too much molasses and the fennel seeds just got stuck in my teeth. So that was a fail. Round two, I adjusted the ingredients just a little bit and it turned out like a hockey puck. A total fail. Baking really is an art and science. Round three, I added cacao and orange into the mixture and that was a flavor success, but then I had a series of frosting fails. Like the time I tried to make buttercream using ghee and homemade powdered coconut sugar that I blended in my vitamix and then sifted. I posted about it on Instagram and a pastry chef messaged me the exact science as to why you can’t make buttercream without the cream…duh. Also, did you know that most powdered sugar contains cornstarch? So be sure to buy organic when you do use powdered sugar because they at least use tapioca starch in lieu of the corn products. The starch in the powdered sugar and the molecular structure in butter (not ghee), allow both to work as a thickening agent which makes that rich buttercream so traditionally used in baking and frosting bases. These are the things I never learned working as a raw food chef and spending most of my formative years cooking trying to fake ingredients to be something they were not….ie. nuts are not bread or cheese, and sometimes pretending that they are just doesn’t work. 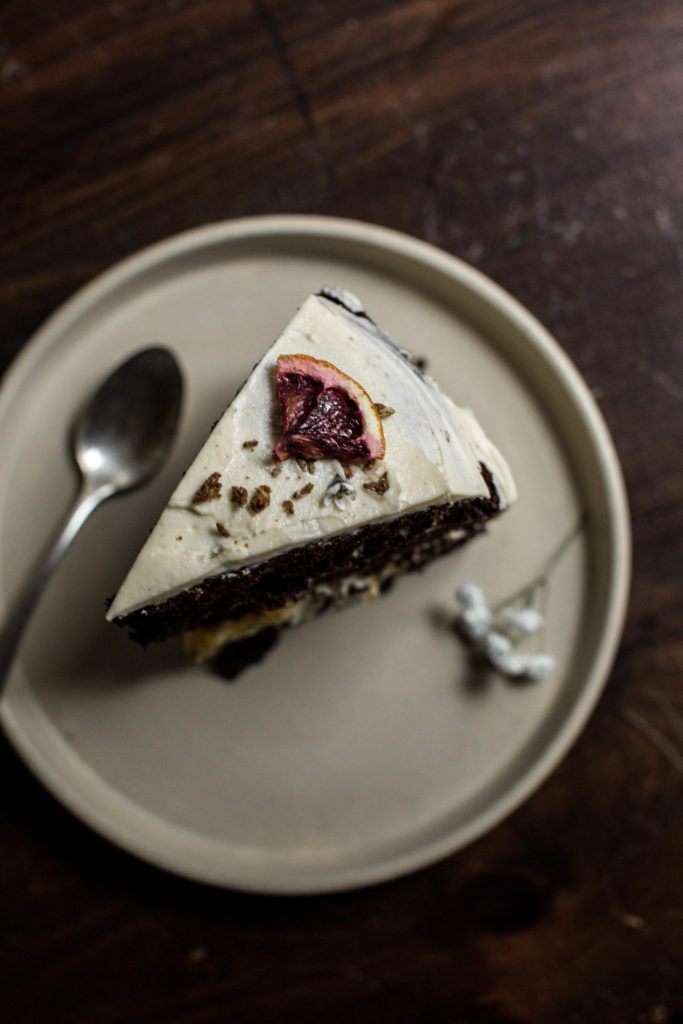 Don’t get me wrong. I love my healthy plant-based substitutes and I still love playing with recipes to work more plants in a creative way. But this year of 29 was also the year of questioning everything I thought to be previously true. And I’m starting to realize that sometimes a local egg or the raw milk from a CSA dairy farmer in your community may actually be a lot healthier for ourselves and for the environment than the boxed almond milk bought from a store that was flown in a from a distributor of a company who had a third party packager chemically engineer a product because we’re over-farming almonds. Phew. Yes, that’s where my mind has been. Letting go of attachments to identities and ideas of right vs. wrong, and instead examining what’s real and what is meaningful over fad. 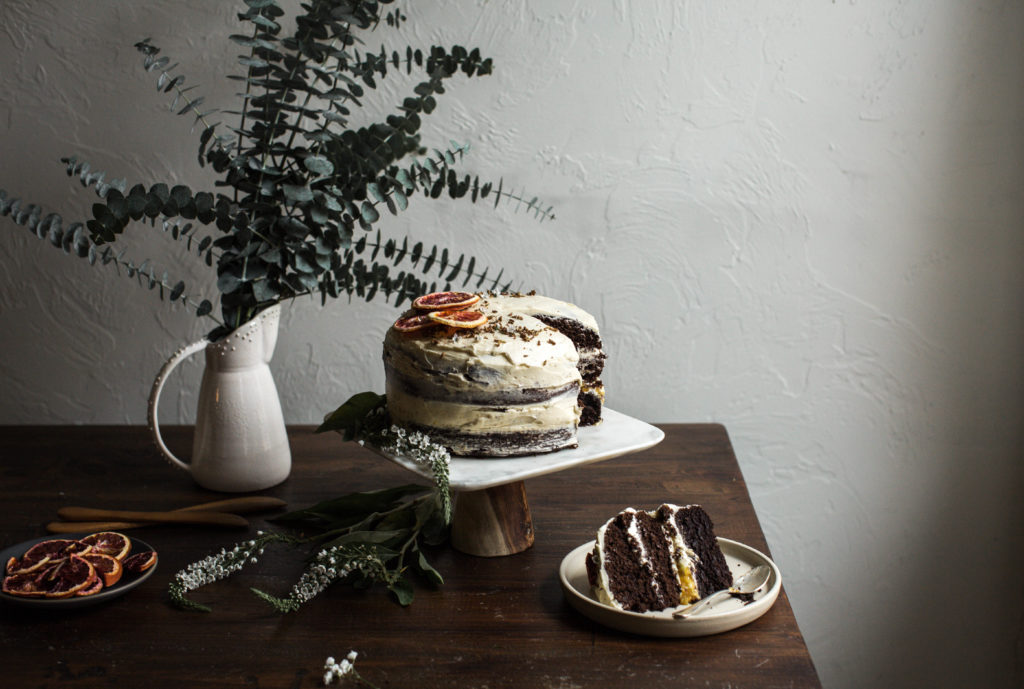 So this year, I made a cake that uses real butter and eggs. I even made a buttercream frosting for the first time in my life. And then got a total sugar high after and decided I better try an alternative as well! This is what 30 is to me. Questioning my previously held beliefs, getting clear on the “why” behind all things and moving towards what feels authentic and real to me. 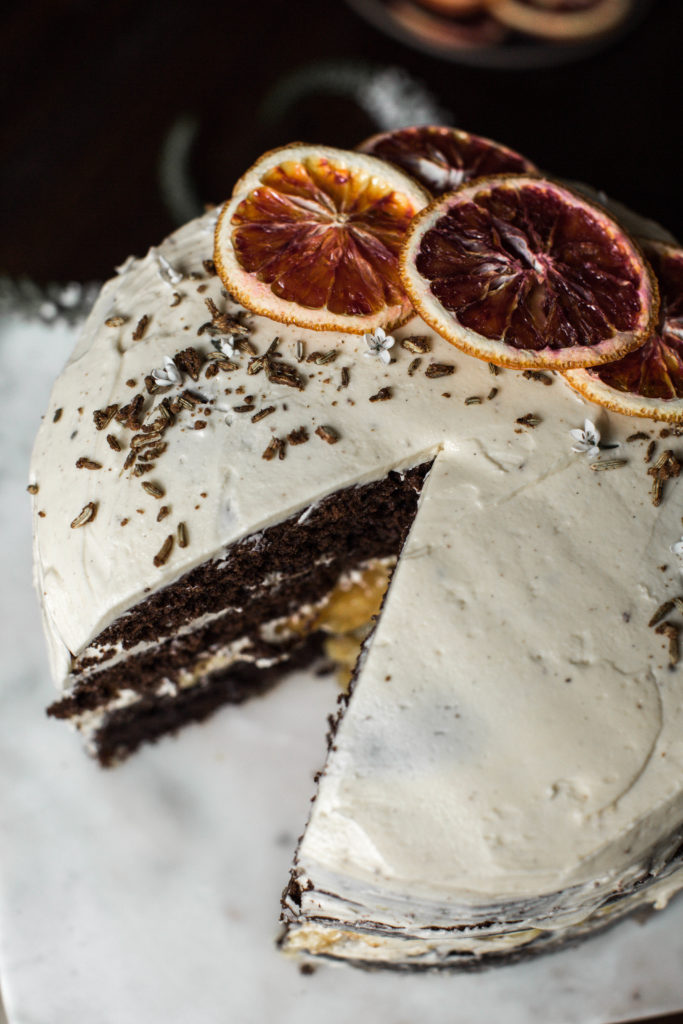 This cake is neither vegan, nor gluten-free…though it can be if you’d like! I tested it both ways, and found both to be different but equally wonderful. My final variation was the full egg and butter cake with my friend Heather’s brilliant dairy and sugar-free buttercream recipe from her site, Yum Universe. It was a merging of both worlds I was satisfied with. It doesn’t have to be all or nothing to be good and good-for-you right?

I made it a triple layer cake (no age pun intended) by slicing the second layer in two and spreading the orange marmalade I brought back from Portugal between the layers of frosting. It was decadent, and well loved at a dinner party. I got my cake fix then, and now, on this new moon weekend, I’m off to hike and camp on the Nā Pali coast. Cheers to cake and celebrations of life ahead… 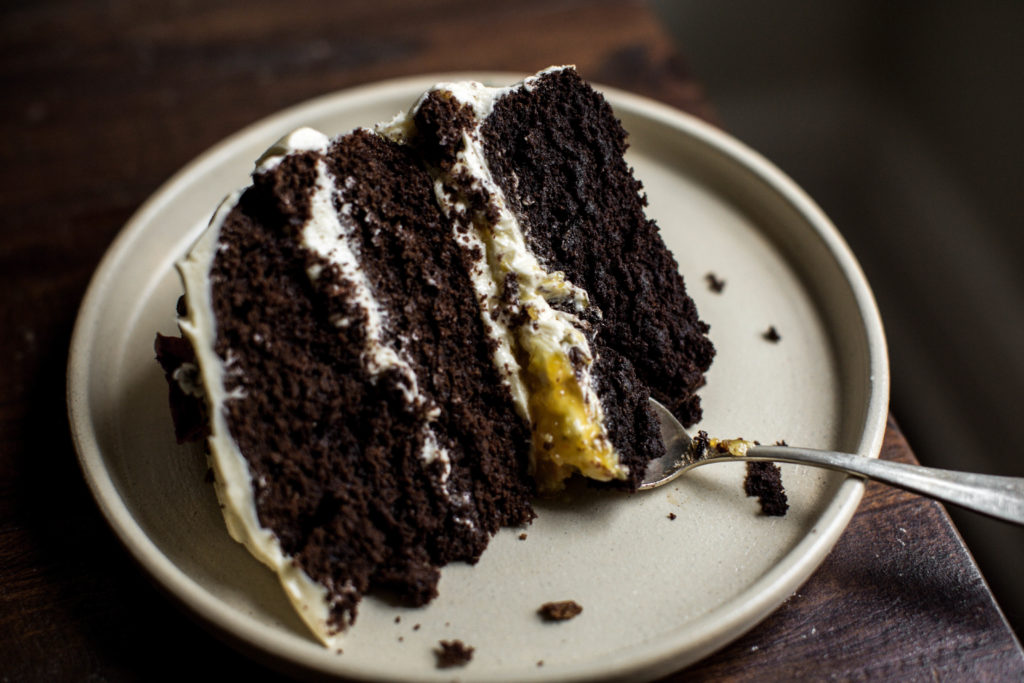 Preheat the oven to 375F. In a mixer, cream the butter and sugar together. Add the molasses and maple syrup, then mix in the eggs.  In a separate bowl, sift together the flour, cacao powder, cinnamon, baking soda and salt. Mix in the sifted dry ingredients into the wet. Add the hot water and orange zest, mix until fully combined. Grease two 8-inch springform baking pans (if you have two, or bake one after the other as needed). Divide the batter in half and pour evenly between the two pans. Place in the oven and bake for 40 minutes, or until done. Remove from oven and allow to fully cool before removing from the pans.

Heat a skillet on medium heat. Add the sugar and water, bring to a simmer. Stir continuously until the mixture becomes syrupy, about 2-3 minutes. Add in the fennel seeds. Continue to stir until the mixture crystalizes, it’s a quick process so don’t walk away. Quickly remove from heat and continue to stir a few more seconds until the fennel seeds are dry and separated. Allow to cool before storing in airtight container.

Sift the powder sugar through a sifter or fine mesh strainer until you have 4 measured cups of powdered sugar. In a mixer, beat the butter for 3-5 minutes until softened and light. Slowly add the sugar into the mixer. Scrape down the sides of the bowl with a rubber spatula, add  the vanilla and lemon juice, then turn up the mixer and beat on high for a further 3-5 minutes until fluffy, well mixed and smooth. Store in the fridge to chill for 15 minutes to set before spreading.

Drain and rinse the cashews. In a high-speed blender, combine all the ingredients and blend until creamy. Transfer to a bowl and cover. Chill the frosting in the fridge for at least 2 hours before using.
*Adapted from Yum Universe

Assembling the Cake, once the cakes are completely cooled, use a cake leveler or a serrated knife (that’s what I used) to remove the domed tops off one of the cakes to make it flat. Work slowly here to ensure evenness as you level the cake. Then place the leveled cake bottom side down and spread icing across it, creating a thick layer spread evenly with a spatula. Next, spread the layer of orange marmalade (about 1 cup) across the the icing, leaving about an inch from the edge as you spread from the center towards the edges.  Place the second cake, bottom side down, directly onto the icing and repeat with another 3 tbsp. of icing. Turn the second cake upside down and ice the bottom of the cake. Gently lay it on top of the marmalade layer. To ice the sides, dab on small amounts of icing along the sides of the cake, then start spreading them out as you rotate the cake stand until everything is smooth, without adding too much frosting. You can take some off with the spatula as you go around if the icing is too thick to keep peeks of the dark cake layers. After finishing the icing, serve right away or store in the fridge before serving. Take out of the fridge 30 minutes before serving. Decorate the top of the cake with the candied fennel seeds, dried orange slices or edible flowers for an extra touch.

Note: To get extra fancy, you can carefully slice the two cakes in halve with a serrated knife for a four layered cake. I went for three layers in the version pictured here with the base a thicker layer and the top cake as two thinner layers.